The history of the Group’s involvement in shipping goes back over one hundred years to 1868, when John Constantine Pateras of Oinoussian origin died at the age of 39 and left his three sons — Constantine, Nicolas & Diamantis (the founding father of the group) — with a debt free freighter.

In 1876 the “EVANGELISTRIA” was bought on a 50-50 basis with the Hadji-Georgios Lemos family and in 1886 Diamantis John Pateras together with his two brothers made their first exclusive joint purchase — another small freighter the “DIMITRIOS”. Together the brothers fully conducted the management of the enterprise. A total of six sailing freighters and several steam-powered ships were acquired in the following years, whilst the brothers’ skills, experience and success grew. 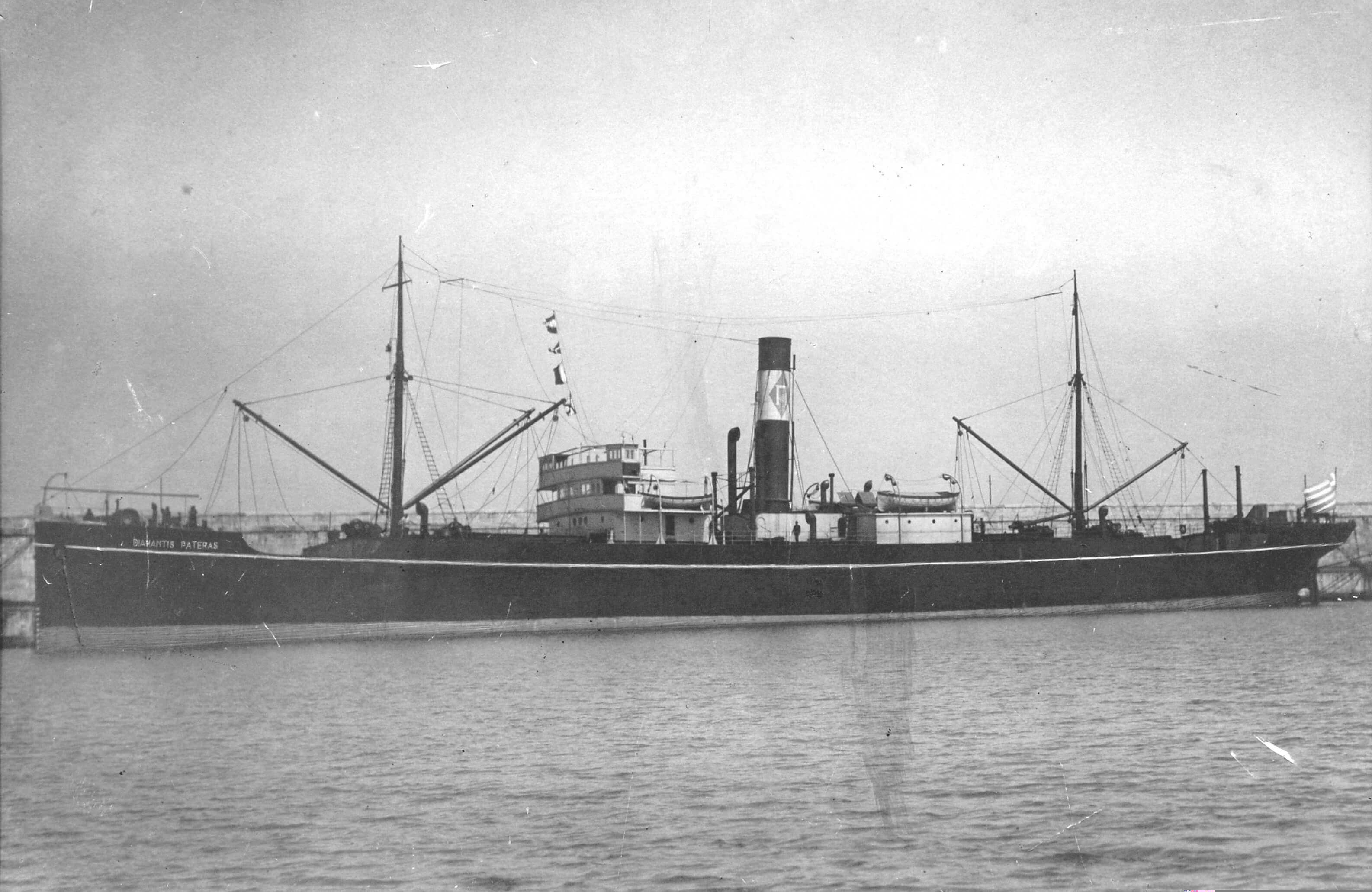 After World War I, the successful association of the brothers amicably ended to allow greater autonomy for each and in 1923 Diamantis J. Pateras together with his elder son, John Diamantis Pateras, bought a steamer of 5,600 DWT, built in 1905, and named “DIAMANTIS PATERAS” (photo). This vessel was lost in 1925 but one year later the 6,200 DWT “DIAMANTIS” replaced her and was joined in 1928 by the “KALLIOPI” of 8,150 DWT. It was on these vessels that the three elder sons, John, Panagos & Pandelis, learned their nautical skills and gained practical experience. 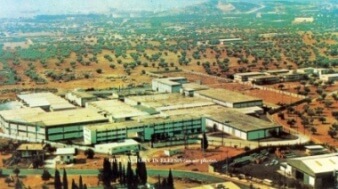 In 1932 the fourth son, Stephanos D. Pateras, after obtaining a Ph.D. in Chemistry, set up a paints and varnishes company, called “VIVECHROM”, which has grown to become the largest and most reputable organisation in its field in Greece.

In 1990, “VIVECHROM” became a member of “NOBEL INDUSTRIES” and some years later the company merged with “AKZO SA”, one of the largest paint companies in the world. 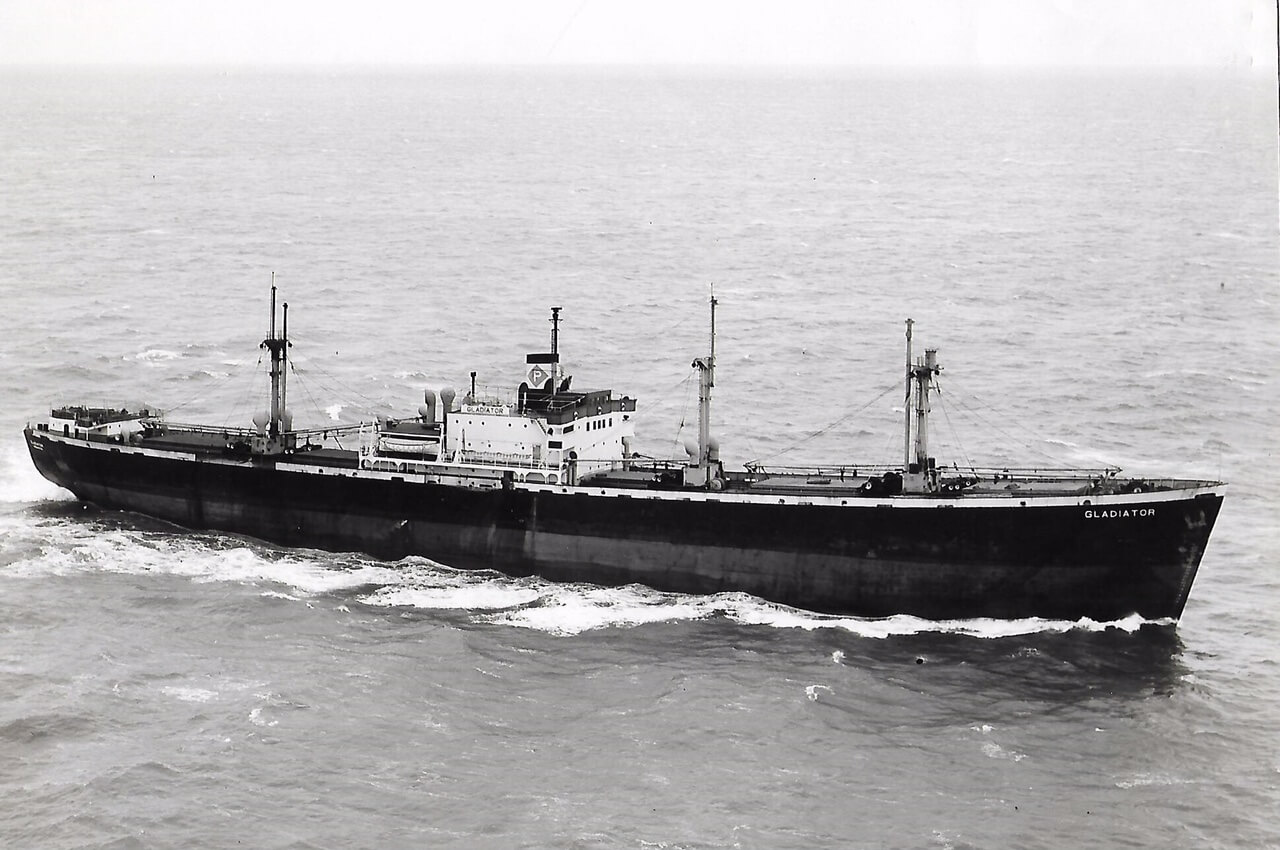 The corporate history of the Group in shipping began in 1937 when Diamantis J. Pateras, represented by his elder son, John, jointly formed the company “LEMOS & PATERAS LTD” in London, with the Lemos family.

During World War II, a large part of the Fleet was lost to enemy action – read more about “DIAMANTIS” vessel

After the War, when the U.S.A. disposed of “LIBERTY” ships to Greek Owners at reduced prices and with favourable financing terms to replace their heavily depleted Merchant Marine, 12 of these LIBERTY’S were acquired and managed by the Company to lay the foundations of a new fleet (photo of “GLADIATOR”).

In 1948 the Group expanded to New York under the initiative of Costas D. Pateras and set up an owning and trading company called “NAUTILUS SHIPPING CORPORATION” involved in the oil and tanker trades.

When Diamantis J. Pateras died in 1951, the six brothers – John, Panagos, Pandelis, Stephanos, Costas & Nicolas – set up their own Company “DIAMANTIS PATERAS LTD.” in London to honour their father.

Two years after its inception, the Group’s first New Building of 10,000 DWT was ordered from a British Yard and was followed by two 12,800 DWT bulkers, “M/S KALLIOPI PATERAS” & “M/S DIAMANTIS PATERAS” and a 19,000 DWT tanker, the “PACIFICATOR”, all ordered in Kiel, Germany. 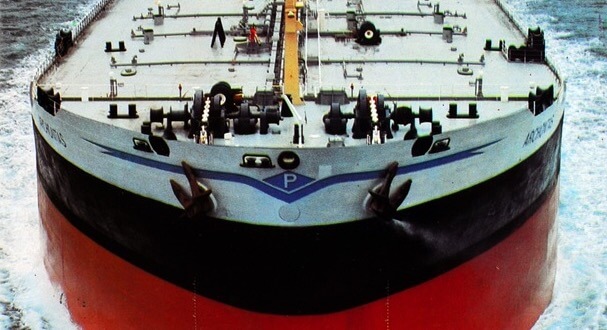 From 1960 until 1972 close ties were forged with Yugoslavia Builders who over this period delivered three general cargo vessels of 14,000 DWT, two bulk carriers of 26,000 DWT together with another bulker of 46,750 DWT. The most recent of the Yugoslav additions delivered in 1972, two 84,000 DWT OBO’s, “DIAMANTIS PATERAS” & “ARCHONTISSA KATINGO”.

In May 1968, DIAMANTIS PATERAS LTD. became a founder member of the OINOUSSIAN SHIPPING CO-OPERATION. In 1969 a new office was opened in Piraeus called LEANDROS SHIPPING COMPANY S.A., which became the Group’s new Headquarters exclusively for shipping. The London Office became their exclusive Agents. During the early seventies the Group carried out a planned programme of investment for further expansion and ordered four handy size bulk carriers 28,500 DWT from Hakodate, Japan – “PANAGOS D. PATERAS”, “KAPODISTRIAS”, “NAFTOPOROS” & “ELLISPONTOS”. 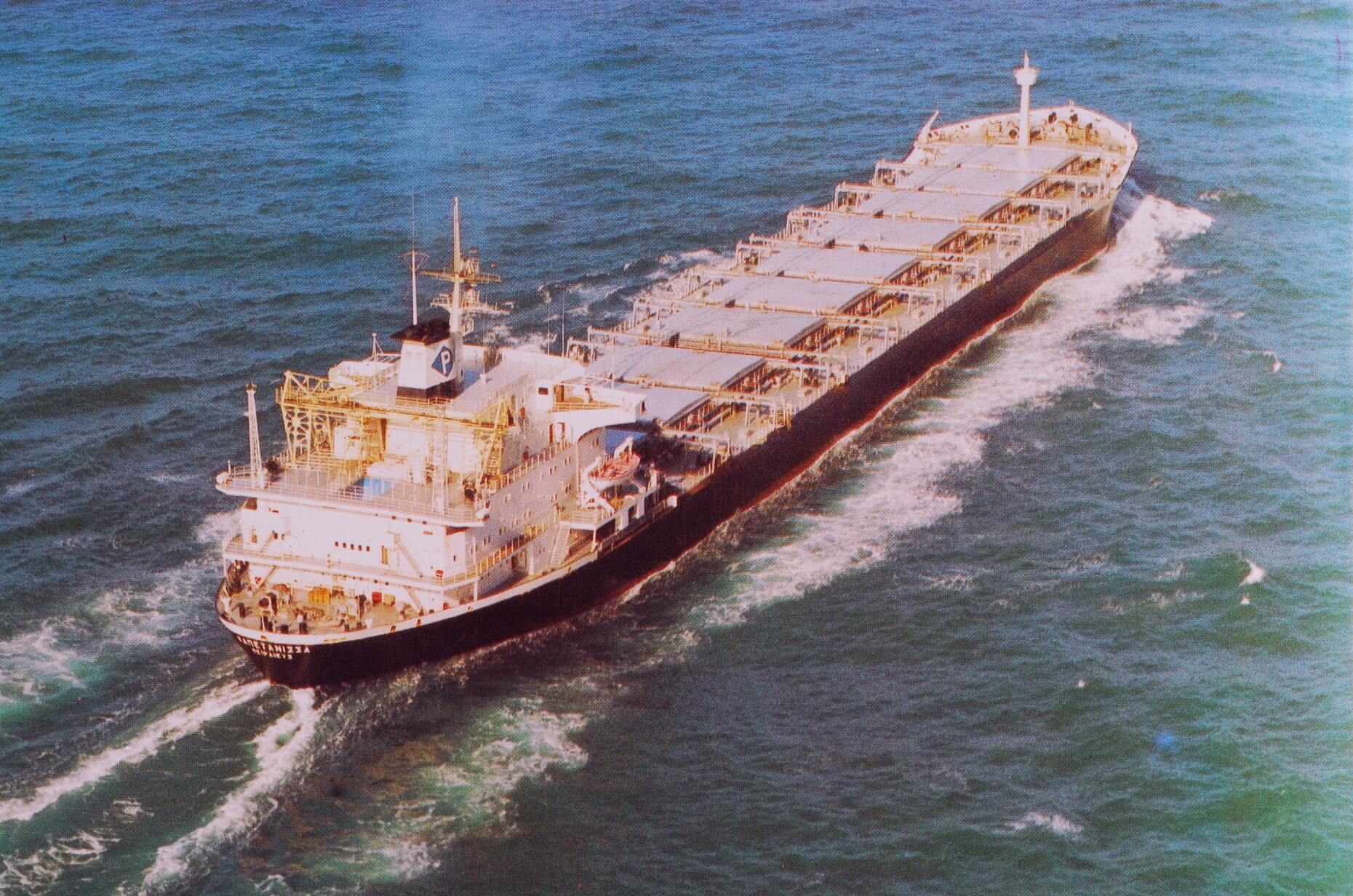 The Group then embarked on a further programme of expansion, resulting in the addition to the fleet of three 54,000 DWT bulk carriers built in Romania, “M/V PANTOKRATOR”, “M/V KAPETANISSA” (photo) & “M/V LEANDROS”.

In 1982, since the Group is particularly concerned about environmental conservation, the whole fleet became member of the Hellenic Marine Environment Protection Association (HELMEPA).

In the summer of 1983, the Group made a historic move, with an acquisition of a high specification reefer, the “M/V EMANUEL” (photo). With the purchase of this vessel the Group had an active involvement in the refrigerated trades.

The Group continued its shipping involvement through the acquisition and operation of various bulk carriers and large reefer vessels that were managed by LEANDROS and KYVERNITIS Shipping. 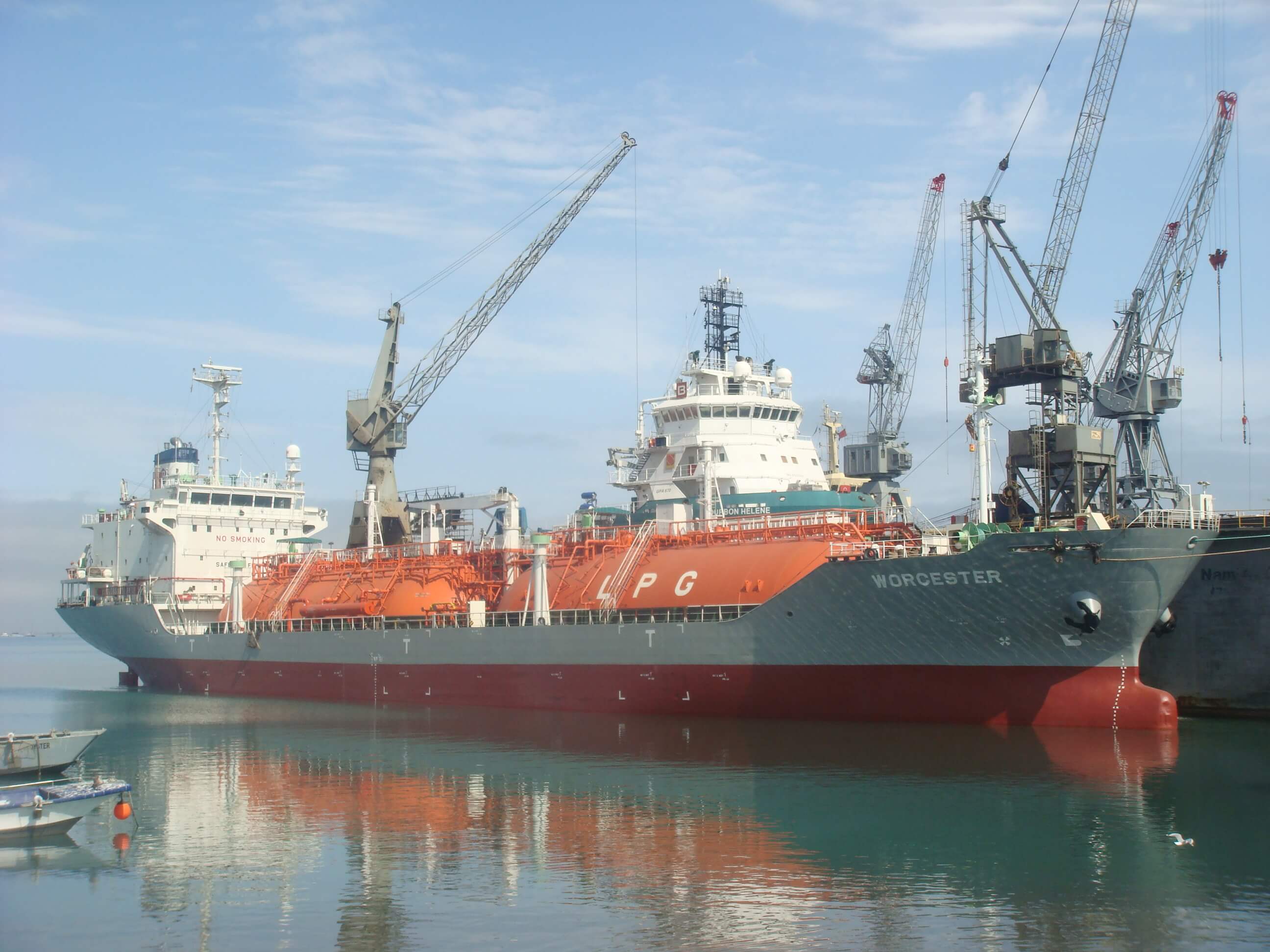 In 2007, DIAMANTIS PATERAS MARITIME LTD. entered the LPG segment of shipping by aquiring the “DP AZALEA” and the “EPSOM”.

The following two years the Company bought another 4 pressurized vessels; “GAS RENOVATIO”, “DP ORION”, “DP PROTEUS” and the “WORCESTER” (photo). By that time the Company had slowly earned its spot in the demanding and challenging LPG segment.

In 2011 the Company arranged a JV with the equity arm of leading German shipping Bank, and further expanded its fleet through the addition of “CORAL MAYA”, “CORAL ELECTRA”, the “LOEX” and the “EOLE”. 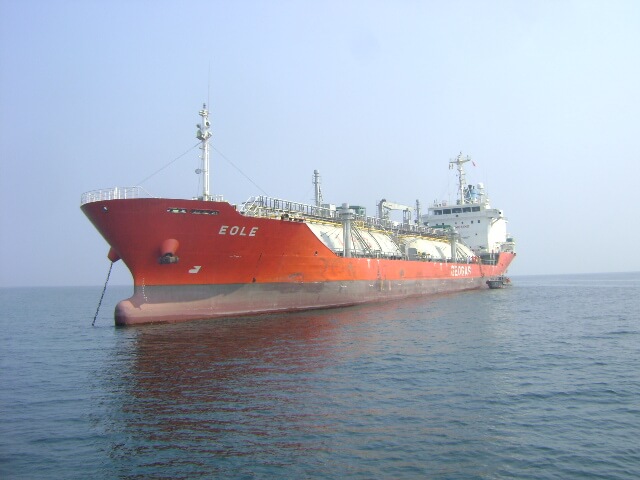 In 2012, DIAMANTIS PATERAS MARITIME LTD., true to its consolidation vision, arranged and executed the merger with another leading Company of the LPG shipping segment, creating EPIC GAS (www.epic-gas.com), which effected a private placement of new shares in Oslo Stock Exchange in 2014.